Before you start to read this article, you need to know how to set up the environment of monkeyrunner. If you don't know how to do it, you can read my another article at http://android-test-tw.blogspot.com/2012/10/android-automation-test-by-monkeyrunner.html in this blog in advance.

Let's brief Jython Script for monkeyrunner below before we go over next section.

The variable for Jython language, it can manipulate several type of variable such as Number, String, and List. The variable in Jython doesn't need to be declared. All you have to do is to assign to value to it.

Let's take a look some simple example and description below. You can copy the script to a text file and save  it to a file named example.py (file name can be any valid file name in your system). Open a cmd window and type monkeyrunner.bat example.py and press enter key on your computer.

The logic statement and loop control are described as follows,

The for statement in Jython is as follows,

First, you need to bring up a cmd window on windows operation system and attach your Android device to computer and check if the computer can detect you ADB interface of Android powered device. 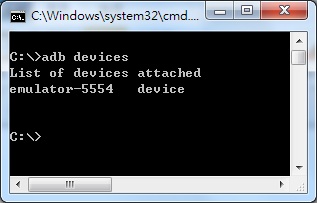 In this example we want to verify the result of run-time image and make decision for next action. At this case, we need to add logic statement in monkeyrunner. The logic script refers Jython Script. However we can refer to Python script tutorial for writing statement because Jython uses the same script with Python. Note, not all the Python script and components/class you can use on monkeyrunner. However you can try to use it.

In this case we need to use a method of MonkeyRunner class that official web site doesn't mention. That's a API - MonkeyRunner.loadImageFromFile(Full_File_Path);

The screenshot of Bluetooth On below was captured at settings/wireless screen on Android device and ran the above script. Note, the screen resolution is 240x432 and OS version is 4.1 in emulator.

A guide to Activity Test by JUnit